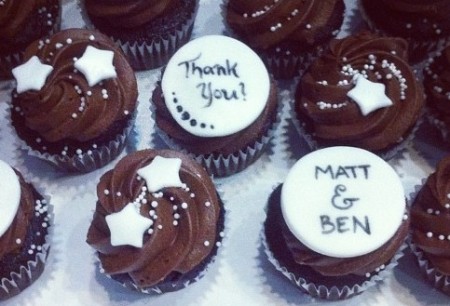 I hope many of you got to see the hilarious little play “Matt & Ben” – put on by some talented budding actors in Granville Island this past month!

This show featured a comedic look at the lives of Matt Damon & Ben Affleck before they were famous. When Pigs Fly Pastries was excited to have cupcakes featured in every show. As well, an assortment of mini cupcakes in “Matt & Ben theme” were available for everyone after the show on opening night! “How do you like them apple cupcakes”, the “Boston [cream] Ben”, and the “MAAATT DAMON” were the featured flavours of the evening. They were a lot of fun – both to make and to serve! When Pigs Fly Pastries looks forward to working with Maladjusted Projects again soon!